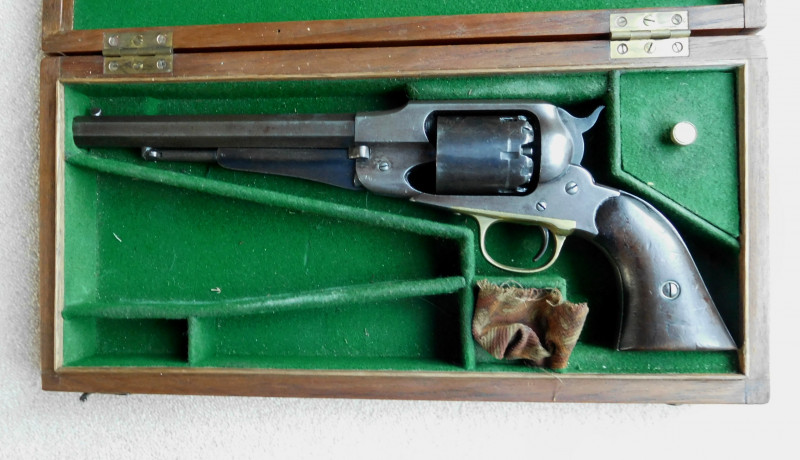 Offered for sale, is an Antique US Remington New Model Army Percussion Revolver. This has a 44 calibre Six Shot round cylinder, and an 8 inch octagonal barrel, which has a now faded standard 3 line Remington Patent/address stamp, and with a very thinned blue finish remaining. The same applies to the cylinder. The rifled bore is in excellent condition.. The steel frame and grip straps are now to a gray smooth Patina of finish. There is a brass trigger guard. The action to 1/2 and full cock is strong and accurate to all 6 chambers. There are one or two inspectors marks to the metal work. The original 2 piece Walnut grips are intact, now to a dark patina of age, with no splits and only minor dings. There is a very faint outline of an inspectors cartouche to the bottom LHS grip. Probably used during the American Civil War, where this type of revolver was one of the 2 major side arms, carried by the Union Cavalry. The other was the Colt Model 1860 Army revolver. C 1861
Contained in a later mahogany fitted gun case, fully lined to the interior with green beige, and a Trade Label to “The Army & Navy Co-operative Society, Westminster. Please note that as the lid when open, lies flat, it was probably made in the USA, and exported to England. There are no accessories. The case is intact, with no splits or cracks, but would greatly benefit from attention to the surface finish, which has now worn and faded. The case probably dates to C 1900.

I have dealt in Antique Arms and Armour for about 35 years, and my interest began as a school boy during the 2nd WW.
After leaving my home town of Leicester, I went to University, and qualified as a Dental Surgeon at Guys Hospital in 1961 .
My main interests are British and North American Arms of the 18th, 19th,and early 20th Century, plus a few Continental items.
It was 14 years ago that I retired from Dentistry. However, I have continued running my Antiques business, initially while still in practice, and now make most of my sales online, but still exhibit at a number of specialized Antique Arms and Militaria Fairs eg .. Bisley, Bristol, and also at the IACF Fairs, at Ardingly, Sussex.
I also deal in Period Scientific Instruments, mainly of a military association, and have a full listing on www.fleaglass.com.

Other items See all