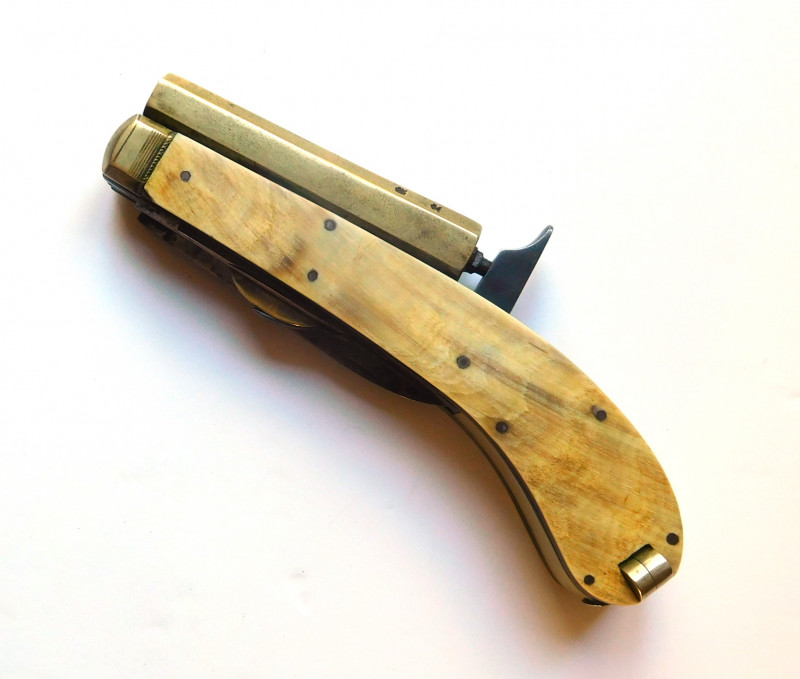 A fine example of a now difficult to find, early 19th Century, English Percussion Knife Pistol. Manufactured in Sheffield, by James Rodgers. It has a 3-1/4 inch single, proofed, smooth bore, Octagonal barrel. This is mounted on a metal frame, with Horn Cladding, which is undamaged, and in vg condition, riveted into position. The Hammer action is very strong and positive, to a full cock, and is fired by a simple drop down trigger underneath. There is a single percussion nipple. There are two recessed, pull out blades, the main one measures 3-1/4 inches, faintly etched..”Self Protector”, the smaller blade measures ..2-1/4 inches. Both blades are stamped to the base/hinge area…”James Rodgers, Sheffield”..
The o/a length is 6-1/2 inches, and with the main blade deployed…10 inches. Complete with an original lead ball mold, and a pair of tweezers,,both contained neatly into recesses. There is a lidded compartment to the rear of this pistol, containing lead ball. This type of item was widely carried by Prospectors during the Gold Rush in the Yukon and Clondyke of North America in the 1840s

I have dealt in Antique Arms and Armour for about 35 years, and my interest began as a school boy during the 2nd WW.
After leaving my home town of Leicester, I went to University, and qualified as a Dental Surgeon at Guys Hospital in 1961 .
My main interests are British and North American Arms of the 18th, 19th,and early 20th Century, plus a few Continental items.
It was 14 years ago that I retired from Dentistry. However, I have continued running my Antiques business, initially while still in practice, and now make most of my sales online, but still exhibit at a number of specialized Antique Arms and Militaria Fairs eg .. Bisley, Bristol, and also at the IACF Fairs, at Ardingly, Sussex.
I also deal in Period Scientific Instruments, mainly of a military association, and have a full listing on www.fleaglass.com.

Other items See all